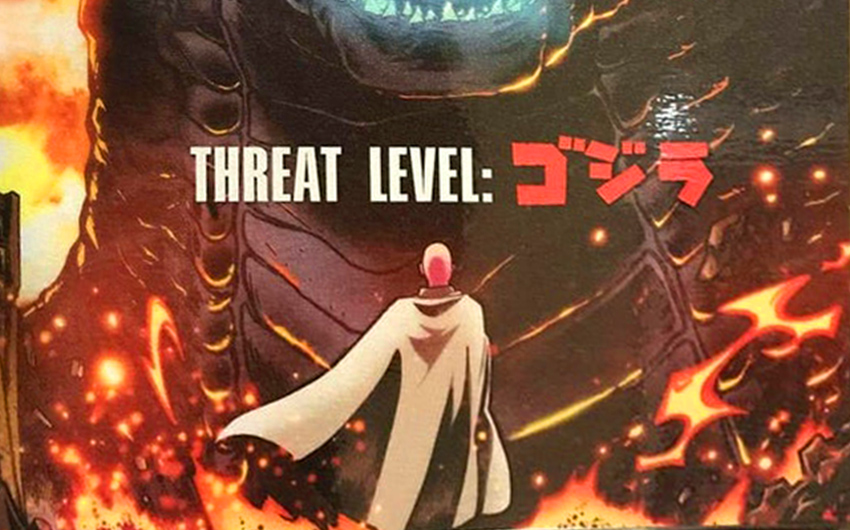 For fans who follow Saitama on his journey as a hero in the One Punch Man manga and webcomic by Murata and ONE, we know that his power at the moment is limitless. Because of this, fans across the world have come up with versus battles that pit Saitama against another powerful foe. That opponent can be from any cartoon, anime, or manga series to date.

Here in this drawing, we have none other than the King of Monsters himself, Godzilla. This giant lizard would be considered a God Level threat in the One Punch Man series. Godzilla is a formidable opponent with amazing power and abilities. Saitama for sure would be testing out his power against him. Most likely will take more than a “serious punch” to defeat Godzilla.

Everything about this artwork is amazing Godzilla was perfectly drawn to scale as you see the size of his head compared to the whole body of Saitama. The color scheme of reds, yellows, oranges, and blues go together very well.

We love the look of the flames and the powered up glow of Godzilla’s projectile attack. The depiction of Saitama says it all. No flare and no theatrics. Just a simple stand-off against one of the most powerful creatures of all time.

If you know who the artist of this piece is, please drop a comment below so we can give him or her credit. We love to see more creative versus depictions and will be posting more.